Peter Brown today is a

semi-retired sales consultant for Eastern Boats, working especially on the Rosborough Boats USA line of “pocket trawlers”. In many ways, however, he is the Godfather of Eastern’s iconic Sisu 22, arguably the most seaworthy hull of her size in existence. And surprisingly, he came to this position not from New Hampshire’s rugged coast but from the broad waters of The Granite State’s Lake Winnipesaukee. During high school and college in the 1960s, he worked his way from the gas dock to the boatshop at the lake’s legendary Goodhue & Hawkins boatyard in Wolfeboro, where he participated in construction of several of the yard’s wooden launches designed by Will Frost.

Huh? Will Frost, the legendary father of the Downeast lobster boat as we know it today, who built his reputation with fast early-twentieth-century boats that caught lobsters but also hauled rum during a dark period in the U.S. Constitution? Yep, that Will Frost, who after establishing his reputation on Beals Island, Maine, also built and designed boats in Rhode Island and southern Maine. For Goodhue & Hawkins, Frost drew 21-30’ recreational boats for inboard power (generally marinized versions of the iconic Chevrolet 283 and 327 V-8 gas engines). Peter Brown reveled in running those Frost boats on shakedowns and learned plenty about how they behaved.

After college at the University of New Hampshire and a couple of other jobs, Peter found himself working for Sisu Boats in Dover, NH in 1977, beginning with hull #12 of the Sisu 22. In an unexpected way, that position closed a circle. The designer of the Sisu 22 was Royal Lowell, grandson of Will Frost, who carried the family’s design genius into the last quarter of the twentieth century. “He had a gift,” Peter Brown said in a recent conversation. “He told me that he could visualize himself lying on the ocean’s bottom and watching how his hull designs performed in different seas at different speeds.” With that gift, Lowell designed the legendary Bruno & Stillman 42 hull workboat hull that dominated the market in the 1970s, and ‘80s on the Atlantic and Gulf coasts. (This writer knows two B&S 42s that have served as freight-and-passenger ferries for the towns of the Chesapeake’s offshore Smith Island day-in-day-out, winter and summer, for forty years. Think about that.)

With the success of the B&S 42, Lowell scaled the hull down, producing a design that became--and still is—the lovely Eastern 18. Then Martin Koski, Bruno & Stillman’s first production manager, decided to go out on his own and had Royal design a 22’ X 7’10” hull, a good size for hauling 100-150 traps before or after a “day job.” That became the Sisu 22. “Those boats rode easily with inboard engines,” said Peter Brown. “We fitted them with 4-cylinder diesels, 60-hp Perkinses and 110-hp Volvos. They weren’t fast, but that was the time of the OPEC fuel crisis. They were thrifty, and they were able. Royal balanced that design perfectly. Th 22s would always fish and bring you home. Theoretically I was on the sales staff, but I toiled in the shop every day and worked the sales phones in the evenings. By 1982, we had built 150 of the 22s and a strong reputation for the brand.”

In the 1980s, BOATING Magazine published a feature about the Sisu 22’s performance, which brought it to the attention of recreational boaters, opening a whole new market. With recreational demand for more speed, the Sisu staff undertook modifications of the hull so that it would accept more power. Remembering his experience with the Frost/Goodhue & Hawkins launches, Peter asked also for molded-in spray rails that mimicked the screwed-on rails that provided lift and suppressed spray on those earlier hulls. That arrangement creates a hybrid hull with the rails just above the rounded chines. The former provides lift and stability, as intended, while the latter promotes an easy motion and soft landings on seas. That is a classic combination for comfortable cruising at 15-20 knots even when seas kick up.

Together, the team also adapted the inboard version’s full keel for an outboard model that was smaller but carried all the way to the transom to provide stability and good tracking. With the engine hung on a notched transom instead of in the bilge, they re-positioned the fuel tank and the batteries to balance the hull.

With a brand-new mold for the redesign, Sisu built about 600 22s for inboard, inboard-outboard, and outboard power between 1982 and 1988. Sisu as a company closed in 1989, but Peter Brown leased the molds from an investor who owned them and built the Sisu 22 as the Portsmouth 22 until 1992. That year, Bob Rosborough of Halifax, Nova Scotia, bought the molds from the investor and moved them to Canada. Rosborough raised the Sisu 22’s sheer and added an enclosed pilothouse, renaming the model the Seaskiff 22. His company continued to build that model—albeit with a lower profile—until 2014, when Eastern Boats bought the molds to it and the company’s iconic RF-246 cruiser.

Today, Peter Brown says, Eastern’s Sisu 22 is built with light but strong composite materials and powered by a strong but economical 115-hp four-stroke outboard that cruises easily and true to form at 18 knots and tops out at 26. It’s available with a cuddy cabin and open pilothouse (roll-down curtains available) or a “bass boat-style” folding Navy top and cuddy. “Forty years later, it’s better than ever,” he concluded with a smile.

Upcoming Event At Our Factory 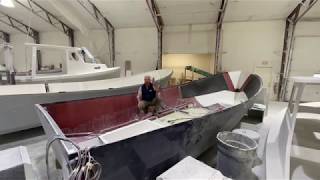 A message from the factory

What is a Semi-Custom build?